From Heidi to TMZ

I’m still compulsively checking if my grade has been posted on the school website. I’ll give him a week, ok 8 days. Until next Tuesday on the 19th. For some reason my mom is freaking out and thinks something happened to my teacher.

So KCOP did a poor job of broadcasting the Ducks’ game. The feed cut off during the pregame 15 minutes into the show. Then it was nothing for 15 minutes. They they put on TMZ. I decided this was crazy and went to check twitter. There were a few people also complaining about it. I guess it really can’t be Heidi because they didn’t show the start of the game. But a Ducks’ goal was not shown. Well the whole 1st period was pretty much skipped. When it came back the sound was really bad though the whole game. At least the Ducks were saying they were working with KCOP on twitter.

I’m gonna go out here and say this KCOP has been a buggy station for years. Even back when I was a kid in the 1980s they would usually have “Technical Difficulties” while I would watch Tom and Jerry. They had them so much they even made a graphic for it. It was of Tom from the cartoon Surf Bored Cat. The funny thing was one time while they were showing Surf Bored Cat they had technical difficulties and they put up that graphic. And it was a little while after that scene appears in the cartoon. 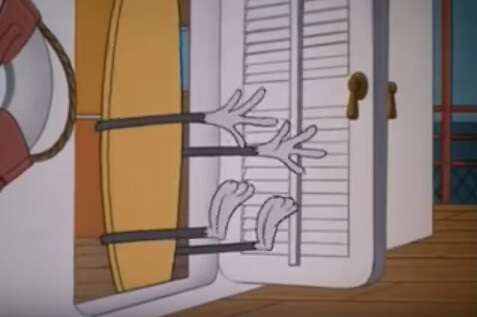 That would be a rare gem to see on youtube.

And the time they had Technical Difficulties during a pre-season Rams’ game in like 2006.