Not all the advice is bad on that blog or website or whatever that is. The advice in this post/article is really not bad.

Most of what is mentioned in this article has to do with group communication theory.

It made me think of all those hobbyists. Because what they do is so specialized they get really snobby about what they do. They might not even have a pond their community might be so small they might have dare I say it; a puddle. Especially when one of them dies because there are so many elderly people who enjoy this. They deal with all the problems mentioned in the article. Let’s just say when a scandal rocks them it rocks them hard.

And there were ads for one of the education programs. I know I should stop torturing myself by looking at/reading those ads when I don’t have the money to go. Anyway one of the slogans said something about when you go there you feel like you belong. It made me think of the Coo Coo Cola song. All they need to do is offer soda baptisms. And other slogans they use like not to feel crazy or alone. When you think about it some of these slogans sound kind of cult-ish.

But its not only about the hobbyists. I had a friend in high school. She would always lament to me about how she was a cheerleader and generally popular. She really had a hard time transitioning into high school from her old elementary school (it went up to 8th grade). She took me by her old stomping ground she told me about how the year before she was in a Titanic knockoff play and the school was producing one the next year. I forget, but it had a funny name. In junior high I was focused on other things. I was more interested in writing my novel, listening to weird music, and wearing controversial jelly shoes. High school wasn’t that hard to transition for me popularity wise. I went from anonymous loser to still an anonymous loser. I felt the hardest transition was all the academic rule changing and teachers from other subjects chewing me out for getting bad grades in subjects they did not teach. High school ended up leaving me unmotivated.

Some of these things are mentioned in a blog I was working on about people who say high school should be the best years of your life. Another one of my friends used to say that his mom told him that. And he believed her. He was a socially awkward gamer. Maybe she had a great high school experience.

I realized that the paragraph I wrote about Pat Riley only about 2 sentences were salvageable. Oh well. It doesn’t really matter right now. I’m not posting a blog about the Lakers right now. I’m writing about tv shows instead. 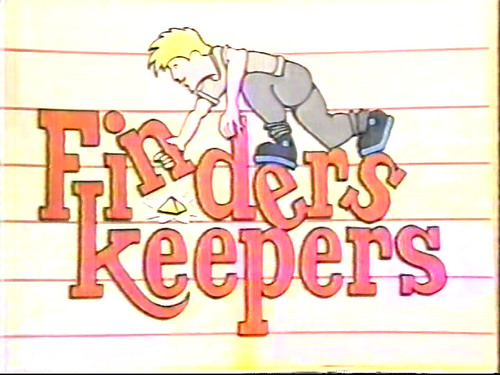 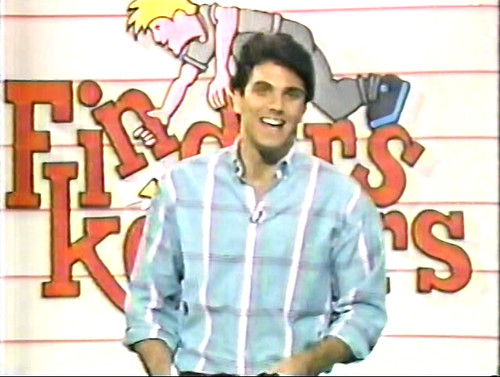 This is the version hosted by Larry Toffler. 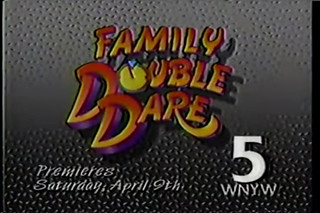 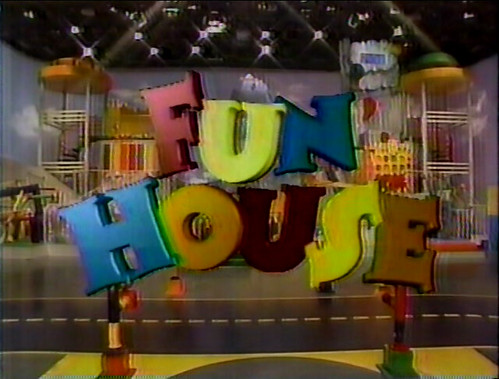 A Double Dare knockoff show. I’m not gonna lie. I always wanted to run through the Fun House. It looked well, fun. 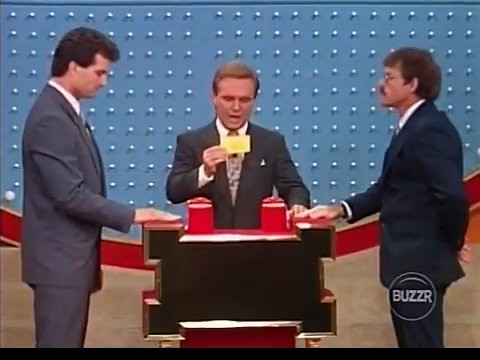 A revival of the show with Ray Combs as host that debut on July 4th 1988. For me this has to be the version I remember most. 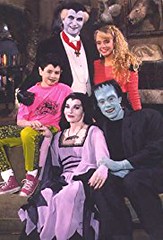 Did I watch this show back then? Maybe? 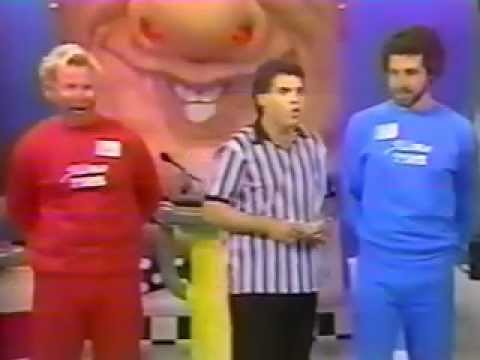 Not to be confused with the similarly titled show called “Slime Time Live”. Another Double Dare knockoff show. They changed it up by having the questions face off style like Family Feud. 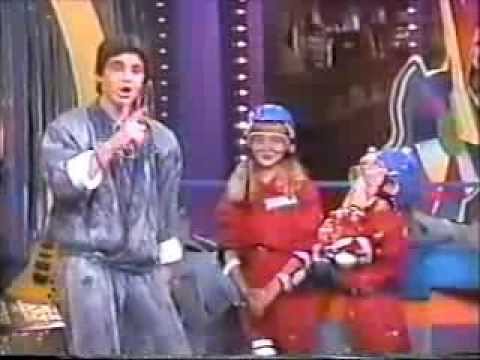 As a kid my reaction to this show was. “This is ‘Finders Keepers’ in a mall!” 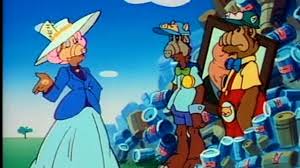 A supplemental series to the Alf cartoon. I remember there was one episode about the Princess and the Pea. 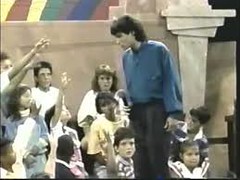 I didn’t see this show until I found it youtube a few years ago. Some of those siblings are jerks. 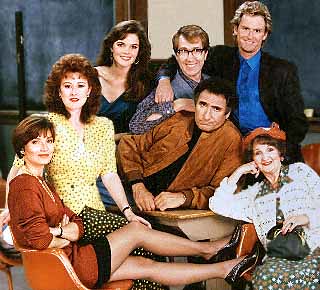 I’m writing about the US version that aired on NBC. I’ve mentioned this show a few times in my blog. I highly recommend it to people who are fans of Community. Although this show is not as absurd as Community. If somebody asks if you are having “sexual problems” maybe you are in the 1 to 1 Club.

I do the Same Thing But Online

I should really post a perspective blog from either 1988 or 1998. I haven’t posted one of those blogs all month. I realized I found a use for that paragraph I wrote about Pat Riley. I can use it for my 1988 themed blog.

I found this funny article from this “advice”? I don’t even want to call it advice website. I want to point out #3 on the list. “Walks poorly on heels”. What if she has no legs or a club foot? https://thepowermoves.com/low-quality-women/

Speaking of writing I’ve started working on my Halloween World fic again. I’ve been working on it briefly and sporadically over the past few weeks or so. But today it really started to take shape. It’s really more disorganized than not finished. It does need a bit of polishing and editing. Most of the story is there.

There were these old men talking about old barbecue restaurants. They were talking old restaurant I used to live by in the 80s. but they gave the wrong location. Then they knocked it down and turned it into a trade school and a gym. All they did was reminisce about old local restaurants and buildings and stuff. Then I realized I do the same thing they do but online.

So I was thinking; What would happen if nothing hinged on the math class? Would I be less stressed? Would I not mind a potential D or F? Would I be more at ease with an unfamiliar subject? Do I really need to go back a level since I’m so far removed from math? Which will take up even more time. Of course I’d love to microwave this with desirable results.

Copy What You see on TV

The first cast member to die was Moose the dog. John Mahoney from Frasier died. I remember one time I was watching the show and my dad said this will probably be the only role he will be remembered most for. I don’t think I can name any other role he was in off the top of my head. I was just watching Frasier last week. It was the episode when the aunt dies and Frasier has the church choir perform Martin’s song at the funeral. Actually that is a go to for when write messages in yearbooks to females who are Frasier fans. I address it to a “groovy lady”. It would say something like “To Wendy: You are such a groovy lady art class was fun.” After I saw that episode I thought I should write a song too, but not send it in to anybody. But then when I told people everybody thought it was stupid. Just remember to follow your dreams. That show had so many good episodes.

I wanna point out something about watching tv shows. Like with This is Us which I don’t watch let to people throwing out their crock-pots because one started a fire on the show. When I was a kid back in the 90s and I imitated stuff on tv I was seen as “stupid”. Why is it now cool?

The commercials were kinda meh this year. In that Voice one the roof on the porch looked like a Pizza Hut roof. I want to try that new Mountain Dew. I saw some at the Walgreen’s last week. If that new one is lemon lime flavor then what flavor is the original one? The Tide one was ok. I guess and maybe the Alexia one. The Martha Stewart Jack in the Box one was good. Nothing really stood out to me.

I did like the trophy shaped confetti that dropped down. Very fancy.

Halftime was meh too. I’m not a big JT fan which is very peculiar for somebody my age. Not with N*Sync or solo. My favorite song of his is “Dick in a Box”. I know all the lyrics to that one. Or is that a Lonely Island song?

That math class I’m going to take is really getting to my head. Maybe 1998 wasn’t a good year to reflect on? I started thinking about when I took high school level algebra. I had this strange dream that I slept for about 2 days. When I woke up in the dream I asked if it was Tuesday morning. My mom said “What are you talking about? You slept all through Tuesday. It’s Wednesday morning.” The worst part is I have not even taken the class yet.

Punxsutawney said there is 6 more weeks of winter. He needs to come here. It needs to feel a little like winter here. It feels like late April or May here. I had this funny idea about writing a World fic about Groundhog’s Day. I felt I should finish up my Halloween one first. I was kicking around the thought of a Christmas/New Years themed one. Maybe I’ll post the Groundhog’s Day one you know like in July. XD

While I was looking for my old diaries I found this old book I made for a class project in the 8th grade. I had taken the class from September to about December 1997.

We had to write about ourselves and the things that were popular at the time like on onions on your belt. Ok not really the onions. I got that from Grandpa Simpson. So the things from 1997 were easy to write because the year was ending and there were a bunch of year in prospective things. 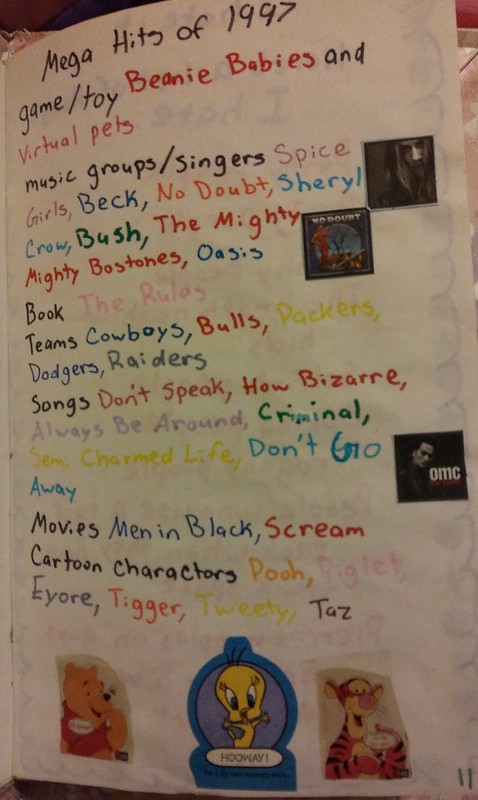 I kept trying to figure out what was “Always be Around”. It’s the Robyn song “Do You Know (What it Takes)”.

This page is about fads.
note: The virtual pet is labeled “pet” and the pog is labeled “pog”. Look at that knock off Patti the Platypus Beanie Baby I drew. The pet looks Tamagotchi-ish. And the word “vitural” is misspelled. 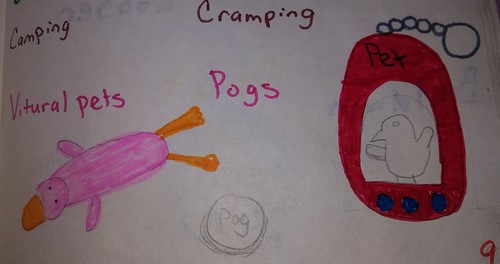 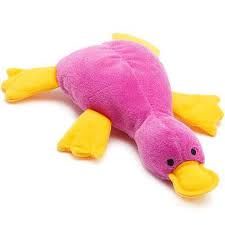 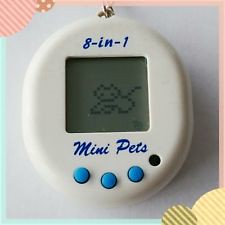 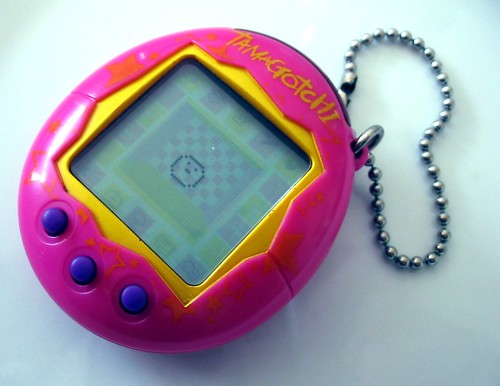