You Can’t Spell Rotisserie Without the Word “Rot”

I forgot we were going to have a quiz today. I know this one was on me. I didn’t work any extra hours at the deli or anything. I didn’t even finish filling it out and what I did write was very wrong. I think I fell asleep during most of the class. I really have to stop doing this. I really need to learn this math. I was bored in class and I drew a Cutie Mark Crew style Firefly, but it sort of looks like Rainbow Dash 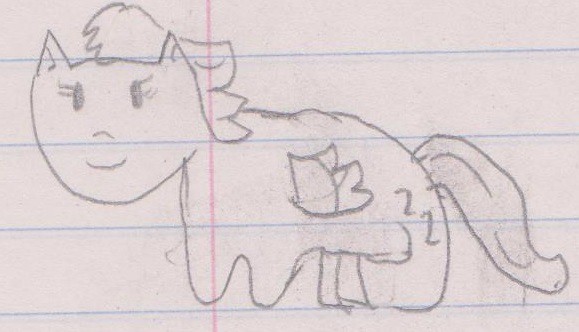 I think I need to study when I can find the time to.

The Depeche Mode shirt I ordered came in the mail. This shirt has been eluding me for months. When I tired it on it was too small. 😭 I ordered the biggest size they had. I thought I’d look so cool with my Depeche Mode shirt leaning against a wall (an indoor wall). Now I’ll look like some dork in an ill fitting shirt. XoX (It’s a “Behind the Wheel” shirt)

I went back to the McDonald’s and they also had Twilight Sparkle so I got one, just the pony no food. I was looking at the change in my hand thinking about the music video.

I thought by bossy coworker was there. So I hid. When I got to the deli I saw it was somebody else. They kinda look the same from the back. But there was no shrieking. Nice and calm. 😌

The new girl is so great! She’s so helpful and enthusiastic. She wanted to unload the rotisserie for me. Nobody likes unloading the rotisserie. Not even me. It’s why they make me do it. So I told her I’d throw out the old food. (which is what they told her to do) She’s not very good at it, yet. I like doing it because I can do it fast and group the food together. When I was getting into the groove of doing that I was told to wash dishes. Washing dishes! Bleh! I’d rather throw out old food.

Her job was to clean the rotisserie. I really don’t wanna go around spreading bad advice/training skills. I don’t know much about how to clean it. I’ve only done it like 3 times. I know it was less than 5. When she showed it to me I was thinking “Wow! You really cleaned that thing!”. I didn’t say much I just told her she did a good job. Which was no understatement.

The deli kills your spirit.