Do you Know What Today Is?

Do you recognize that lyric? It’s from the Tony! Toni! Toné! song “Anniversary”. A great song. Highly recommend.

The strange thing is my parents told me I should have stayed there longer like 6 months worth. I’m still surprised I lasted there as long as I did and didn’t quit on the 3rd day like I really wanted to or after the potato incident. I don’t get it why do they tell me that if they would not have stayed by themselves.

I think that store chain probably loses 50%-70% of the people they hire because they take their job too seriously like I did. (never gonna do that again) Realize the shitshow the store they work at is then quit. In particular I think if there would have been a few things changed the store could have really been run more efficiently. (just in the department I worked in) Stop ordering gourmet food. I used to throw out so much gourmet food the store stocked. Staff enough people to run a department like the deli or bakery. You can’t run either of those with just one person. Train your people and not just have them watch stupid irrelevant videos. If chickens are the most important thing have at least 2 chicken people at each shift. When you hire somebody tell them that will be their only job is tending to the chickens. Stock your deli food appropriately. They were always running out of something or another in the hot case. Keep your supplies well stocked. We were always running out of cleaner, sponges, gloves, containers, and hairnets. All those things will be implemented at that store I worked at when hell freezes over.

It makes me sad because I thought I would have had a job by now. I’m not counting that 1 day job at that t-shirt place. 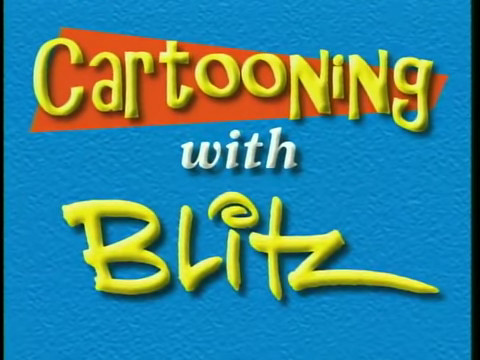 I left this show off my list of shows from 1999. Even if the internet lists this show starting in 2000. But I distinctly remember watching this show in 1999 when I took Art 1 in high school and this is not a Mandela Effect. Found an old tv guide as proof from 1999. Look at the bottom of the page for the 8:30 listing. 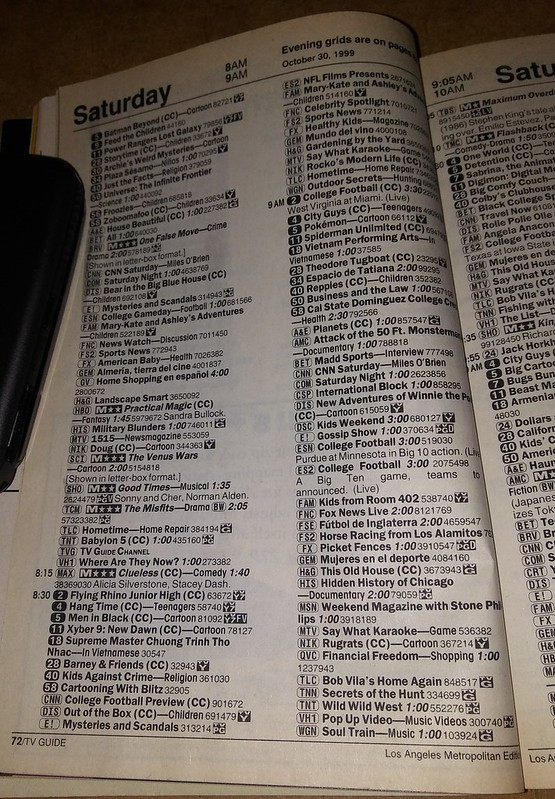 I loved this show since I love drawing cartoons even before I took formal art classes. I used to check out cartooning books from the library. I liked his show it inspired me to make cartoons out of numbers and letters. I used some of the drawing techniques on the show for my Pokémon fan art. I was always doodling number and letter toons in the margin of my notes. Except for caricatures. I can’t draw those to save my life. I used to watch this show and take art classes and think I was a drawing badass.

What happened to me? 🤷

He is still around and has a facebook page you can book him for corporate events and things.
https://www.facebook.com/BruceBlitzCartooning/
and a website
https://www.bruceblitz.com/
Here are 2 episodes of his show. (this is not my video)

Was this a Fake Out?

When I did a google maps search for the place it looked like an abandoned office building or something. I wasn’t going to go there. It didn’t look safe. When I tried to reverse lookup the number but it was nothing. So I ghosted them. I still have no idea what the restaurant even was the guy seemed to whisper mumble the name. That was the interview I was trying to orchestrate during my doctor’s appointment.

I went to the thrift store again. I still can’t find the thing I really want. I’ll know when I see it. It was too crowded there so I left.

I had a job interview at the mall. I just hung out at the mall for a few hours to save bus fare. I applied to 2 other places in person. The interview was real and went very well. She didn’t ask a bunch of stupid questions. So that was a good thing. Saw a kiosk at the mall with a list of stores that are hiring. The thing that sucked the most was the bus was an hour late.

A Relaxing day at the Doctor?

You might say why was a trip to the doctor relaxing? Because I didn’t have any job interviews today. How refreshing!

I found out I lost 10 lbs. It must be from all that walking I’ve been doing. Now if I could only lose 30 more. It was a quick appointment just seeing the medical people.

It was funny while I was waiting I was scheduling an interview with somebody.

I was really there to get my glasses so I could drive.

I had to get up early for this 8am interview and my dad hogged the bathroom as usual. But I made it there on time.

The lady told me she won’t look at any applications without a food card. My mom gave me such garbage job advice telling me not to get one. She asked why I left the deli I said there were never enough people to get things done. She said she has somebody else from that chain store who said the same thing. So I’m not crazy. Remember “understaffed” can be a dirty word. I was asked if I could identify different types of meats. I never got this question before I only asked because different meats of the same kind can be hard to identity sometimes. If they sell 3 types of ham; smoked, honey and sarcaha pineapple. She assured me they only sell one of each type.

I was almost too late to make it the bus was really late. Those buses are never on time. And they wonder why people never like to ride the bus.

The second interview was worse. The first thing he asked was if I could work nights. Then he got mad because I said I couldn’t. I mean why not just put that in your ad!? That’s just lazy. A waste of your time? What about my time? I hope their restaurant fails.

I get a phone call in the morning but it’s very low. They wanted me to come in for an interview at 10am. I can’t go I have an interview scheduled for tomorrow at the same time. So they scheduled it for the very early time of 8am.

I had a job interview I had to go to. So I got there early by accident. An hour early. I tried to play it cool and waited far away outside and hoped they wouldn’t see me. When the guy starts to interview me looks disinterested and is looking away. I knew it was going badly.

Where do you live?

Who do you live with?

Do you have any kids?

I think because I look young they think it’s a good idea to ask me all these questions like this. And it always involves old men.

I don’t get why these people bothering interviewing me? They are obviously unimpressed and frustrated with me. I mean READ THE RESUME I SUBMITTED ONLINE TO YOUR COMPANY! It’s all there or not all there depending on the skills you need and want and stuff like that.

I had another interview in the afternoon.

That one went a little better. Then I got asked again why don’t I look for a communications job? Seriously I don’t even know what a communications job would be and if I even have enough education to get or have one. An associates is not much. It’s a step above high school diploma.

Why do they keep asking this?

third time and 2 times in one day.

I think she was trying to say “unruly homeless people” in a nice way. I bought some food there to go with my dinner at home later. But I had to put it in my purse. It wasn’t too bad my purse didn’t smell like food.

Well at least both of them were real.

I needed a drink!

I walked all the way to the Applebee’s. I was looking for the $1 Vampire drink that Matt wrote about. It really is $1! My total was $1.10 with out tip. I should have kept the receipt. It had suggested gratuity on it. Since the price is so low it ranged from 17¢ to 25¢. So I left the bartender $1.40 in total a 30¢ tip was generous. All I did was order that drink, drank it and left. I was ok. Like Matt said it tastes like grape drink and well rum. 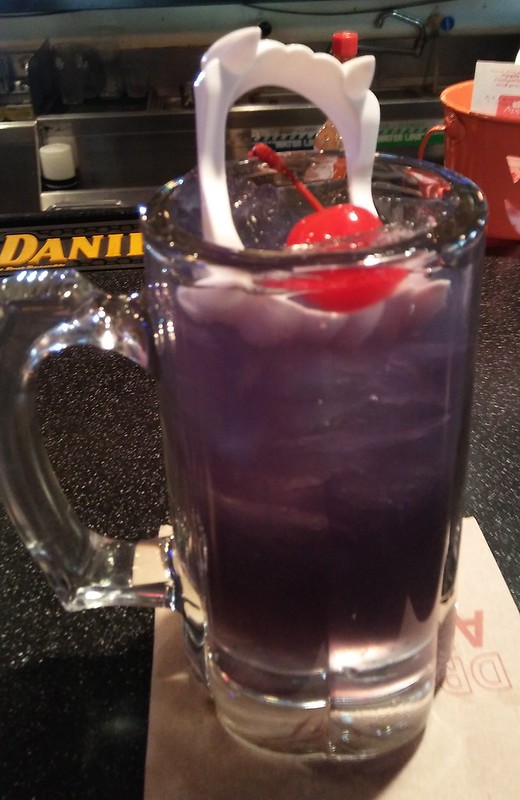 Maybe I should do what other people do for money and sell drawings for $50 a drawing. If I sell 3 a month I could make a lot of money.

I got a very funny phone call yesterday. Asking me to come in for a job interview. I need to ask where it is because it’s a chain restaurant I applied to including that one; 5 different locations. When he says the location I know it’s this guy. Needless to say I turned it down. Wouldn’t the guy have remembered it ended badly? I did. I may be; stupid, jobless, and desperate, but I don’t forget something that happened to me like that a month ago! (Plus I turned down the job that day on the phone with him after arguing with the lady. Is he that desperate for workers?)
I know maybe he “forgot”. 🤷

Then I told my parents about the phone call and we all had a good laugh.

After I watched this instructional video that is copyright 1999. This thing just screams 1999. I just watched it last week. It’s important to learn about food safety.

There was this old PSA they used to show on tv. The funny thing was they would show this during Korean language programming. I was not sure how effective the message was. Eventually they added Korean subtitles to the PSA. After that they made a Korean language dub of the PSA. I cannot find either of the Korean versions on YouTube.

Just needed some time to lick my wounds. With all those bad job interviews. I’m so frustrated by this. Plus I’m not the only person licking my wounds. Some other people are for different reasons. I’m talking about the Dodgers.

Maybe we should all be happy, count our blessings and eat some Dodger Dogs or something. I don’t know *shrugs*

I was thinking about why are some people so concerned with purity? I mean in behavior not in materials or foods. What is people’s concern with this notion? Is it a notion? that you are more pure than somebody by the music you listen to or the things you do.