I was so sore and hungry from working late last night. My mom was mad because I didn’t wake up early to make myself breakfast.

My dad wanted to go the record today. I really didn’t wanna go I need more hobby supplies. I’m nothing without supplies.

When I was looking for a Joy Division CD I found a Knowledge one. It was $7.99, but I thought it was rare. I was just thinking about the song “Clinton Youth” yesterday when I was washing dishes. Great parody video for the song. Parodies “Inside Out”, “Ray of Light”, and “One Week”.

They had “Violator” shirts in my size too. I wanted one the last time I was there, but all they had were smaller sizes that would not fit me.

I found a KLSX compilation CD from 1987. I knew my dad would go for it. Especially since he guest DJed a show on the station. I think he secretly wanted to be a DJ. Like my grandpa was. I think he thought I was following in those footsteps by choosing my major. I just think mass media communications is interesting and well that fight I got into on a message board like 18 years ago. (warning: tv fans will chew you out! Remember that and do your research! Always, no exceptions!)

I heard “Electricity” by OMD in the store. I discovered that song a few months ago and love it.

I found the Hello Kitty Becomes a Princess DVD. I had been looking for that DVD on Amazon for a while. I tried to order it years ago but my prepaid credit card got declined. I ended up with a Strawberry Shortcake DVD instead. That is 3 Hello Kitty DVDs in a week (not counting the one that was the same as the one I already owned). And a copy of Babe.

They still had masks with bands on them. You know I didn’t want one with Dave’s picture on it. The “Violator” rose is more subtle. I’m not wearing this to work anyway. I have been wanting a novelty mask for a while. I got a button with Dave in the “Enjoy the Silence” king outfit. Then she says Dave has a great voice and is the king. Nothing wrong with Dave he’s just not my favorite. I admitted I’m a Martin fan and that they should get “Halo” buttons like from the music video. I’d buy like all the “Halo” buttons up!

Two of those things I had been meaning to buy. Oh well at least I don’t have to wait on shipping. I guess that is my 6 months present.

After I really wanted a pizza and I know there is a pizza place a few stores down in the same shopping center. It was lunch time anyway. That was my plan if there was nothing I wanted at the store I was still getting a pizza.

Later when I saw it. It says “Policy of Truth” on it. LOL! 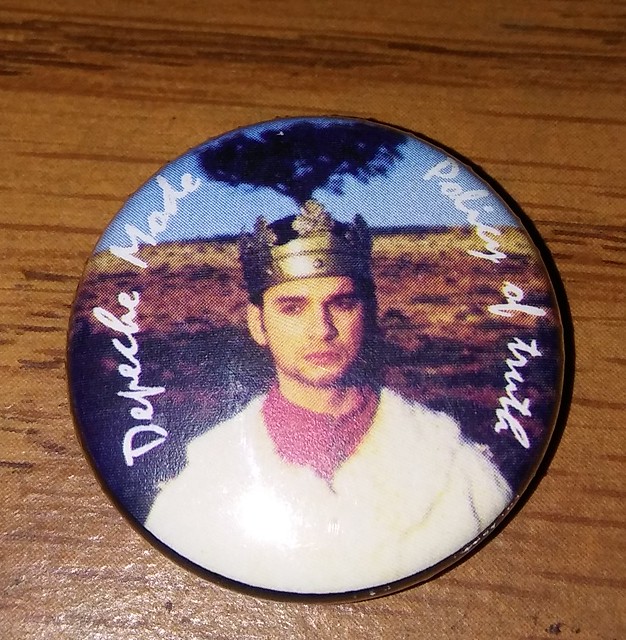 When it was about 8:30 I thought about what I would be doing at work probably washing dishes or something. I thought I’d get caught up on wrestling, but I didn’t.